So there he stood, purple-suited and dapper, at the top of a staircase dividing the Symphonica Orchestra in two. Arms outstretched, eyes to the skies, I feel good came belting straight out from his heart. George Michael finished his rousing anthem to renewal, waved goodbye to an adoring audience and left me, and the other 20,000 fans, breathless and screaming for more.

We filled Earl’s Court last night for the final night of George Michael’s Symphonica tour, and we danced, sang and screamed through two and a half hours of pure magic, George style. We waited 45 minutes for the show to start and as soon as we saw the familiar, shiny suited silhouette behind the red curtains, and heard that voice begin to sing Through, all was forgiven. He reminded us, in the most lyrical way, that boy, he can sing. 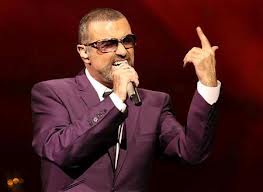 Looking sharp and sounding fine, he kept us close for the entire show. I read a Huffington Post  review  that described George Michael as a ‘star reborn’. It went on to describe George as a ‘changed man. George Michael has been looking after himself, and it shows.’ I overheard some older ladies at the interval sharing a similar sentiment: “He’s really handsome. I know he’s gay and all, but when he looks at you, it really does something to you. Doesn’t it?”

After an emotional opening number, he got us all up on our feet for My baby just cares for me before taking us on a journey to the 80s and 90s with Father Figure and Cowboys and Angels. A fun Star people moved him on to a cover of Rufus Wainwright’s Going to a town, which he sang in tribute to ‘my gay boys’. He dedicated You have been loved to his mother, and ‘for all of you who’ve lost someone since this song was written’.

Wild is the wind got the audience to its feet and him boogying his trademark jive at the front of the stage before he took us to the 1920s with his outrageously fabulous version of Brother, can you spare a dime? I screamed in delight as the song reached its beautiful brass-filled crescendo. On the final note our star left the stage, triumphant.

The short interval over, the purple-suited star returned to the stage with You can’t always get what you want. He introduced his sincere and gentle performance of John and Elvis are dead as a song ‘written by my best friend, David Austin’ before moving on to Sting’s Roxanne. A weird, autotuned rendition of New Order’s True faith followed, about the nature of addiction, which George said he had ‘no clue’ about. He mixed poignant with rousing through my favourite A different corner, Rihanna’s Russian Roulette and the supremely moving Praying for time.

Whether sitting and crooning or striding and jiving, George’s energy and sincerity shine through. His hands move expressively and you believe every word that he sings. When he left the stage after his final number – significantly, I feel good – we screamed and we whistled, we stamped our feet and clapped our hands till he returned, waving to and applauding his appreciative audience.

After introducing his band, and inviting the sublime Symphonica Orchestra to take a bow, George took us on a loud and thrilling journey through Amazing, I’m your man and Freedom. He apologised for making us wait a year [he cancelled his tour last December when he fell seriously ill] and hoped it had been worth the wait. A second emotional departure from the stage left the audience screaming for more. George again obliged with a final, gentle I remember you.

“Thank you, London. I love you. See you soon,” he screamed as he left the stage.

We hope so, George. We sure hope so.