She warmed up a chilly Southend evening like a golden shimmery ray of sunshine. Her soulful sounds mixed with her charming east London banter made for a fabulous evening out. Thank you, Paloma Faith; we’re big fans.

The beautiful young red-haired woman from Hackney came on to the stage in theatrical style. Wearing a glittery golden dress and carrying two oversized fans, Paloma opened her show with a surprisingly understated Let your love walk in. Singing alongside her three extraordinarily talented backing singers, with lead guitarist and grand pianist, she drew the song to a quiet close. As she sang Beauty of the end, the stage curtains opened to reveal a dramatic set of palm fronds and mirrored glass, and the rest of her outstanding band, all tuxedoed in black and white: keyboard player/bass guitarist, drummer and keyboard player/percussionist.

The haunting  When you’re gone showcased more of Paloma’s theatrical instincts, each wave of her arms creating another beautiful silhouette. The rousing cover version of Inxs’ Never tear us apart  brought the audience to their feet, and the lead guitarist to his knees. Paloma then greeted the audience with an enthusiastically east end, “Hello Saafend!” 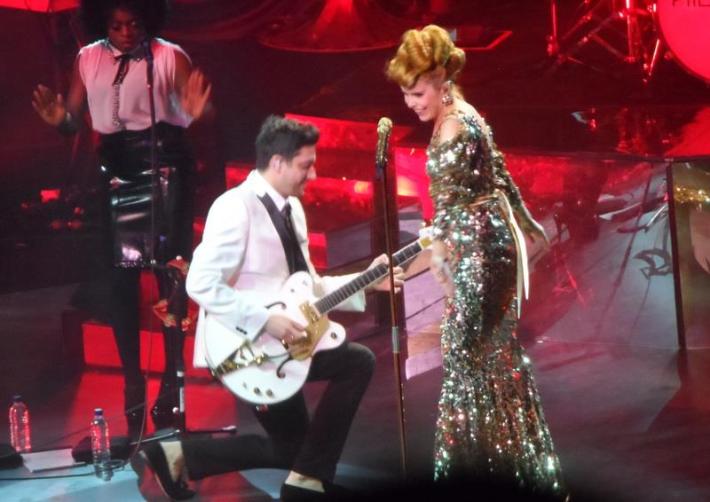 With a hint of an apology for her Hackney accent, she quickly added, “Saafend, I fink you lot are even worse!”

She then went on to say, “It’s very arty; and then she talks. But you can still be clever and talk like this!”

At this point, she said we ‘clever clogs’ should be cheering her on. She reminded us she’d been nominated for two Brit Awards and then went on to say, “Who would have thought? Not me; coming from Hackney.”

Paloma told us the rules for the evening:  ”Sing along, if you know the words. Otherwise, you might as well be listening to the album at home, and listening in a lonely way.”

The audience needed little encouragement to join in with the fabulous Thirty minute love affair followed by a dazzlingly dance version of Blood, sweat and tears. She then introduced her first album Do you want the truth or something beautiful and then suggested that anyone who’d not bought that album, might want to go and have a cigarette break.

Before starting her first album set, she said she didn’t know how Tina Turner does it, singing Simply the best over and over. “I’ve only been in the game since 2009, and already I’m sick to the teeth of Stone, cold sober!”

With no hint of ennui , she belted out the number to screams and whistles from the packed house. She followed with Do you want the truth or something beautiful? and then introduced her band members as each soloed their way through the delightfully Parisian-sounding Upside down.  As she sang her wildly popular New York she got down off the stage to walk and among her fans in the mosh pit.

Back to the stage and to her second album, Fall to grace, she sat on the grand piano for the sublimely harmonised Just be. As the audience sang along gently with her, she curled up on the piano, before moving on to the appropriate Let me down easy. Streets of glory followed, and then the dramatic Agony, and a demonstration of Paloma’s contemporary dance training. For Freedom she stood on the piano, before inviting the audience to visit her merchandise store (‘even though my mum said it’s probably closed by now, but I’ll promote it anyway’) and avail themselves of ‘Topshop-worthy clobber. You’ll find no sticky transfers – our  T-shirts have the image embedded in the thread’.

Introducing her second last number, she said, “If you don’t know the next song, you’re definitely here as someone’s guest.” A fabulously stirring  Picking up the pieces followed, before she closed the show with a golden confetti shower over Black and blue.

A final mention of her band members, our leading light closed the show with, “And I’m Paloma Faith” before bowing, blowing a kiss and waving us goodbye. What a great show, and what a sparkling star; Hackney, Paloma’s done you well proud.

6 thoughts on “A shining star from the east end”