It’s been a good old while since I wrote any blog posts. So I’m thrilled to be back after such a long break, and freshly inspired by a number of things – a lovely trip to Barcelona at the top of the list. My goal is to be here weekly – on the blog, not Barcelona, although that would be fun!

I won’t try and catch up in one single go; I will try to do so over the coming months. So much has happened over the past few years, and I have so much to write out of myself. I plan to do that here and in my ever-brewing “book”. I’ve also chosen not to wait until I’m good enough to do so. That’ll only happen on the eleventieth of Javembuary.

Mr Sunshine and I have fallen a little bit in love with Spain. Last New Year we visited Valencia, our first adventure in Spain, and this New Year – last week – we soaked in the extravagance of beauty, history and sunshine that fills every corner of Barcelona. We walked our feet raw, and got ourselves lost more than once. We watched street flamenco and under the perfect ceiling of the Palau de la Musica Catalana. We ran out of words in the shadow of Gaudi’s extraordinary La Sagrada Familia, and we learned to laugh in Spanish and Catalan. 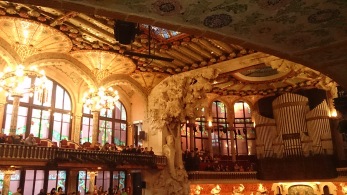 We flew out of a rainy, grey London and into a balmy and sunny Barcelona. We took the bus that stopped right outside our hotel in Castelldefels, a small village outside of the city. The bus ride cost us about two euros each – a refreshing difference from the high costs of public transport in the UK. After a long walk to the local beach, we sat down for a typically delicious and social meal as the sun set over the Mediterranean. 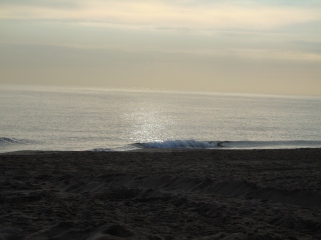 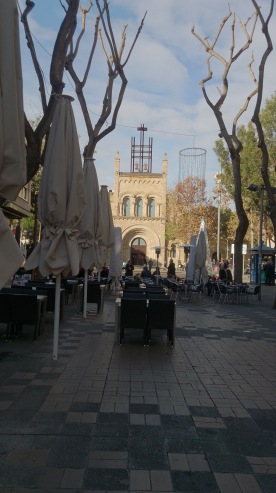 Castelldefels – our home for a week

Our first trip into Barcelona brought us from the train station up on to Passeig de Gracia, where we were met by the awesome sight of Gaudi’s Casa Batllo.

We later discovered this to be the Block of Discord, in which  Gaudi’s house was just one of three architectural masterpieces to vie for the coveted town council Arts Building Annual Award (Concurso anual de edificios artisticos). The very beautiful example of modernism that is Casa Lleo Morera, designed by Lluis Domenech i Montaner (he of the equally exquisite Palau de la Musica Catalana fame) won the award in 1906.

We remained in awe for the week. To my amateur eye, Barcelona’s architecture oozed with opulence, detail, beauty, flamboyance, indulgence, bravery.

Not only are the buildings striking in their styles but also in their structure. Each noted architect was supported by teams of artists and artisans – 150, in the case of Casa Lleo Morera (pictured below) – to realise the vision of the master architect. Mosaic ceilings, the art of trencadis (mosaics created using shards of broken tiles), remarkable marquetry, hand-painted and stencilled tiles – no detail was overlooked. We were quite overwhelmed.

The main living area that opens on to the back yard

And then there was Gaudi’s unfinished La Sagrada Familia. There are no words – I was quite overcome by the depth, breadth and generosity of imagination, innovation and genius. 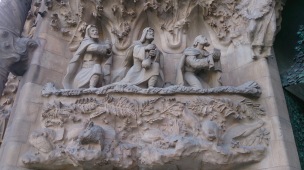 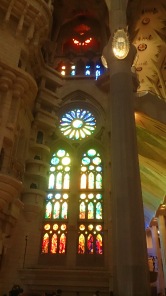 Moving away from the beauty and historic importance of the city, we had loads of other fun. We visited Barcelona’s home of football – Camp Nou – to watch FC Barcelona play Real Betis in a La Liga match. We joined 99,998 over-excited football fans to witness a trouncing by the home team. The fans screamed passionately for their beloved Barca again to do them proud, and they obliged in style. We watched the world’s best footballer – Messi – score a goal right in front of our eyes. When he did, the crowd screamed, jumped to their feet and chanted ‘Messi! Messi! Messi!’ as they waved their arms in adulation.

When the referee made an unpopular decision, the crowd again jumped to their feet and yelled their displeasure, waving their fists and hands at the ref. In between, there was singing and chanting in praise of the beloved home side, ‘Barca, Barca, Barca’.

Back near our hotel, we visited a small, local eatery in the village of Castelldefels. We sat at one of the very few tables, and one of the other tables was filled with a group of locals who had one tooth and a dozen beers between them. Together they laughed and screeched at the game show playing on the TV above them, momentarily distracted by a local pooch wearing a pretty pink ribbon. As they petted and hugged the dog, the TV show was replaced by a succession of music videos – James Brown, Bob Marley and, ironically, Whitney Houston.

We ordered a glass of rioja each and they were brought with a plate of cheese for us to nibble on. We ordered a selection of tapas, and soon ordered a second glass of wine. The waiter raised his eyebrows and said, “For her too?” Haha! The bill came to 18 euros; while that was exceptionally inexpensive, we found eating out in Barcelona generally very reasonable.

Language was a challenge. Although we speak neither Spanish nor Catalan, we managed to communicate enough by sign language and pointing, to order the food we wanted (mostly) and get to where we wanted to be (mostly). Someone asked me at the train station if I spoke Catalan, and I just shook my head. I thought she’d asked if I spoke Latin, which seemed a bit odd to me at the time.

A young guy at a bus stop asked us something in Spanish, so we shrugged and apologised, “English?” He pointed at his wrist, so we showed him our watches, and he nodded and said, “Merci.” On another occasion, a woman said something to me in Spanish and, in a bizarre twist, I answered in Xhosa.  I still don’t know why I thought that would be useful.

When we celebrated New Year in Valencia, we discovered a fun Spanish tradition. We joined thousands of locals in the town square, in the shadow of a clock tower and, as the clock struck midnight, we ate 12 grapes. The idea is to eat the grapes in time with the chimes and, tradition suggests that if you do so, you’ll have a year of prosperity.

We noticed the locals’ grapes were small, seedless ones. We had large, seeded grapes so only managed about three in the allotted time. We also looked like feasting chipmunks as the locals all around hugged and began their year of prosperity.

This year, we bought the smallest grapes we could find and, although we couldn’t find a local gathering, we successfully finished our dozen grapes as we watched the clock chime midnight in Barcelona on our hotel TV.

After our final hotel breakfast in the company of a touring basketball team from Lithuania, we boarded our bus for the airport and flew back into grey, rainy London. You know, with 12 grapes under our belt, it feels like 2016 is going to be a good year.  Hasta la vista, baby.

Sunshine signing off for today.

2 thoughts on “Ola from the other side”