My New York blogging buddy, jacquelin, told me about Postman’s Park, just behind St Paul’s. I met up with my husband one sunshine-filled lunch time last week, and we walked across the London Millennium Footbridge over the Thames, towards St Paul’s Cathedral – a sight that still takes my breath away – and we walked around the massive and awe-inspiring church to this little spot:

This little spot is interestingly one of the biggest parks in the City of London. It was built in 1880 on the site of a churchyard and burial ground of St Botolph’s Aldergate. Named as it is because it stands on the former site of the General Post Office where postmen often sat to eat their lunch, Postmans Park is also home to a sheltered wall commemorating, as something of a protest against the upper class, ordinary people who lost their lives heroically trying to save others. G F Watts, the painter (1817 – 1904), came up with the idea and he commissioned Doulton to create the hand-lettered tiles to honour the otherwise unheralded and unnamed heroes.

In a similar vein, one of my colleagues showed me this little site just down the road from our office. Known as Cross Bones, this is an unconsecrated burial site, going back to medieval times, for “single women” and paupers. (“Single women” was a euphemism for prostitutes, known in the area as “Winchester Geese” because they were licenced by the Bishop of Winchester to work within the Southwark area known as the Liberty of the Clink.)

According to Wikipedia, the Liberty of the Clink lay outside the jurisdiction of the City of London, and as a result became known for its brothels and theatres, bull and bear-baiting. The age of the graveyard is not known: John Stow (1525 – 1605) wrote about it in A Survey of London in 1598, and by 1769 it had become a paupers’ cemetery for the poor of St Saviour’s parish. It is believed that about 15,000 people are buried there.

When the London Underground planned the construction of its Jubilee Line through the area, between 1991 and 1998, archaeologists found this overcrowded graveyard with bodies piled on top of one another. Test showed the deaths to have been caused by anything from smallpox to TB, Paget’s disease, osteoarthritis and Vitamin D deficiency.

The find captured the attention of local community members who created an informal group – Friends of Cross Bones – to campaign for a permanent memorial garden on the site, which has also become the site of annual Halloween festivals – held every year since 1998 – marked by processions, songs and candles.

My, how the times have changed. Or have they? 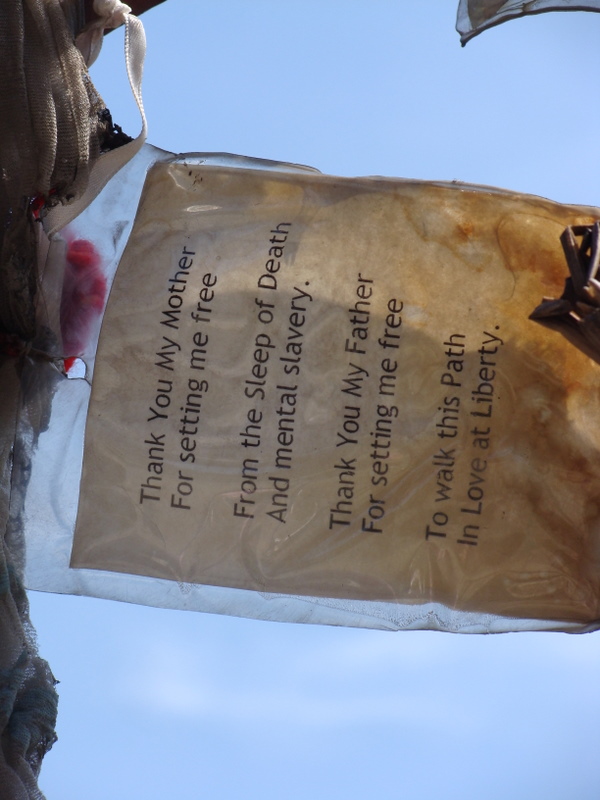